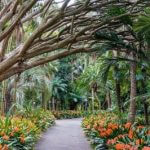 The Royal Botanical Gardens Sydney’s most beautiful attraction is the oldest scientific institution in Australia and one of the Southern Hemisphere’s oldest public parks. Opened in 1816 by founder Governor Macquarie, the park was built on farmland and became famous for its rare collections of exotic fauna and flora hailing from other countries, which ranged […]